Recently I read a poignant post in National Geographic Traveler by writer Don George about visiting his long-ago childhood home. In it, he describes rediscovering “the layering presence of history.” Seeing his physical house altered by its new owners, he also noted the changes made him feel “It was home, but not.” The full story can be found at: http://t.co/j76y20LZiz). To excavate the past, we memoirists have to dig through those historical layers to explore memories long covered over by those who came after us. In my infrequent trips back to Miches, the village that was home until I was nineteen, I always made my way to catch a glimpse of our old house. I hoped each time to find—and therefore accept—the inevitable changes wrought by the new owners. But ghosts still float through the hedges and haunt me anew each time I peer over the fence, or actually enter the premises. I wrote about this a few years back in an essay published in Passionfruit, a literary travel journal. This excerpt describes one such homecoming: 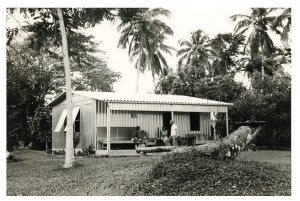 “It took several days before I managed the courage to hike the beach path to our former house, a small aluminum dwelling my mother had dubbed Casalata because when it was all locked up, it looked like a tin can. It is still owned by the man who bought it from our family and used infrequently as a backcountry retreat. I had only seen it twice since we left the island. A caretaker found out I was visiting and insisted I see the house. When he unlocked the front door, my stomach dropped. My mother’s Fiestaware dishes in orange, yellow and dark blue still lined the kitchen cabinet as if I’d dried them off moments before. Souvenirs from my father’s travels in the 1940s adorned the knick-knack shelf. A faded and stained National Geographic map, dated 1957, hung on the wall, a few pins still marking countries to which my family had traveled before settling here. Yellowed magazines from 1967 slumped in a pile—Look, Time, The Saturday Evening Post and National Geographic.” My most recent visit to Miches was in 2013, after I’d finished the final draft of my memoir The Coconut Latitudes. The same man still owns the house and no one has lived in it since my parents sold it forty-five years before. There have been no new layers to buffer me from the past.

The familiar artifacts surround me—an ancient croquet set with bent wickets, a barometer set my father used to calculate how close a hurricane might be getting, my mother’s clock, the very same 1967 National Geographic I remembered from that previous trip.

These are the current occupants, beckoning with ancient and crooked fingers, tearing through my skin. Outside the house, storms have long ago toppled all but one tree. The yard is vacant, empty of all the flowering bushes my mother planted so long ago. Since the outside is no longer the same; I can let it go. But inside those aluminum walls, the past is like a scar that won’t fade because it is still present, unchanged except for the ravages of time. And so I write, sometimes as an exorcism, other times as a prayer, but always as a means to make peace with the past. Home, but not. 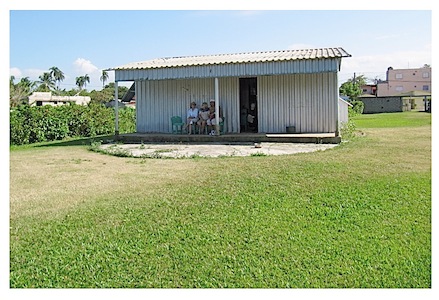